30th December 2006 – All the big portholes are now marked on the new den. In the next couple of weeks a friend of mine is going to put them in. 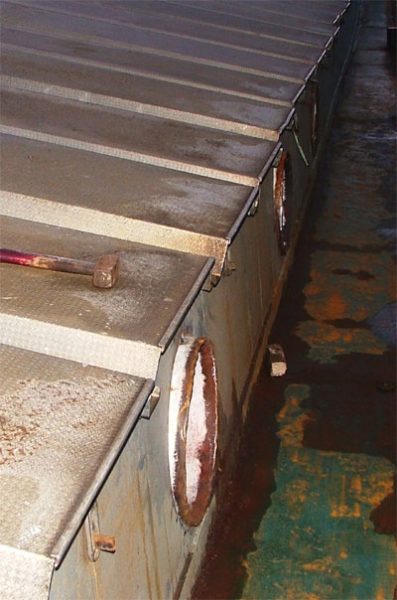 All wooden plates from the side of the ship were placed on the floor, created two days ago. Between every plate I put some smaller wooden pieces, so air can pass between them. Since all plates are now properly stored, I get a better impression on the space that needs converting. My neighbour’s wife was painting her interior and I was hoping I was already as far as they are now…

29th December 2006 – A sunny day today. Perfect for painting the new entrance to the cargo hold with the gray paint. 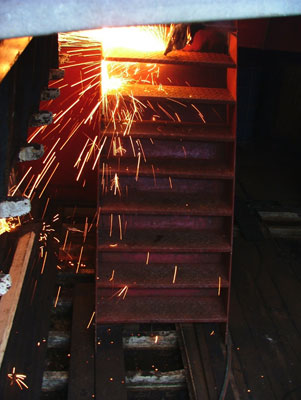 In the afternoon, we placed the stairs to the cargo hold. My crane was just strong enough to hold it while cutting and positioning. 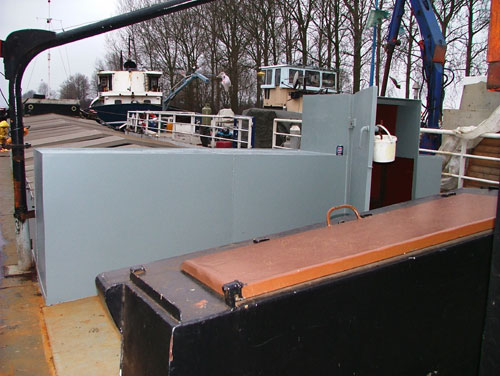 28th December 2006 – Two more portholes were placed today. I also continued cleaning the bilges, with graceful help of my parents.

In the afternoon, a part of the floor has been laid in the front of the cargo hold. It was placed properly, but not fixed yet. Since I had no electric saw, everything was done by hand.

27th December 2006 – A friend came today for helping me with the big portholes. They can’t be burned since the heat will damage the plates of the den. Therefore all holes will be grained. A job that is going to take some time.

Today we have started removing all rain water that had entered the boat during its construction works. With a hoover, all bilges were cleaned from water, dust and other rubbish.

15th December 2006 – I had to be in Terneuzen today, so I quickly jumped aboard to have a look at my crane and take a few pictures. While I was in Terneuzen, I took some time to take pictures of the remaining ships of the water company fleet that once owned the Watergeus. 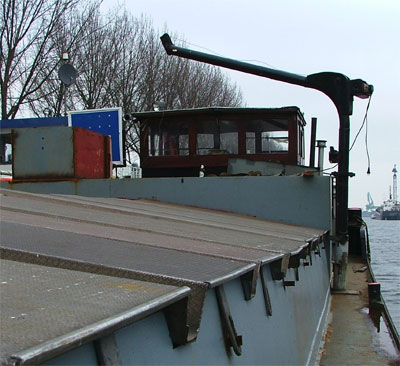 12th December 2006 – My electrician had some time today, so we drove back to Sluiskil. He connected the navigation lights, while me and my neighbour worked on the remaining jobs, such as fixing the hatches, putting the crane in position and drinking a beer… 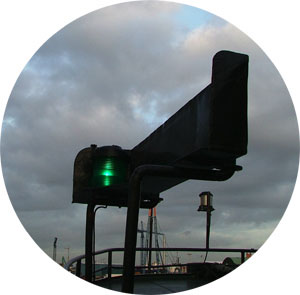 The crane will be placed on port side, so it directly suitable for my mooring in Bruges. Another reason for choosing this site is the place the blue board. It wouldn’t look right having everything on one side.

The weather changed to quickly, so we didn’t have any time left to place the stairs.

9th December 2006 – Still adopting to live left handed, I decided to go to my boat anyway.

When I arrived, my neighbour was finishing the door entrance. It is starting to look good! Later that day, my stairs and railings arrived with a friends barge, the Benjamin.

The stairs come from an old sport fishery barge, the Hardy. This boat is now a houseboat in Sluiskil under the name Harte 1 (and my other neighbour). They are perfectly adjustable for my ship. My entrance is around 85cm and the stairs 92cm. They fit perfectly. Since they are so heavy, it is a perfect ballast for my boat.

No matter how much I like wood, I think it’s better to have the critical parts in metal.

At the end of the day, I visited some friends and went back home. It’s always nice to see the progress that can be made in one day.

Watergeus – There goes my plan

8th December 2006 – A small accident happened and I broke my wrist, so I don’t think many changes will happen in the next couple of weeks.

3th December 2006 – Last week, at home, I started cleaning some of the 11 big portholes. Today we did the rest aboard the vessel. We will place them probably next week if the welder has some time left. 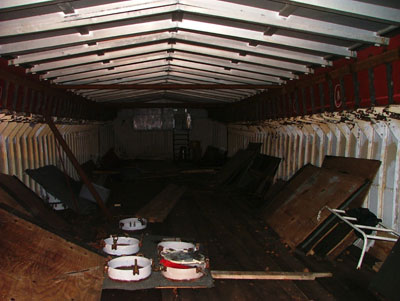 I drew the rooms and windows position on the metal, to get an impression of the size of the rooms. After drawing my first plan, it needed some adjustments. For example: a room of 4m by 3m is quiet big for a sleeping room. My living room, which intentionally would have been 7m by 5m looked rather small…

Drawing a boat on paper / computer is easy, but often far from reality. The rooms are now drawn and looking much more acceptable and realistic.

Because of the bad weather, there is still over 10cm of water in the bilges. One of these days, I’ll pump it out, so I can start working on the floor.

2nd December 2006 – Since all metal work was finished and the last ribs were welded, it was time to cover it with a fresh coat of primer. The only primer I had was gray, so it looks a bit like a Navy vessel, but at least, it can’t rust anymore.

Painting two sides took us some time. It looks so much better then the wooden construction.

In the afternoon, my door was placed, a heavy job. The door has a weight of over 150kgs. She was carried by four men aboard my ship. The four of us had to walk over the two other ships first. Since it are all different ships moored next to each other, we had to be carefully of the difference in height of each of them. We had to strengthen the construction, so it could hold this door.

During the welding works on my door and it’s frame, my parents and I cleaned the cargo hold, sorting out the wood and removing the rubbish left from the construction works.