31st October 2015 – The floor in the kitchen area is badly damaged; it was the first part that was built. I had to cut it open at some point when there was water in the bilges. When I built the kitchen and later removed it, the sheets of wood were damaged again. I’ve now cut the good parts nicely and built some inspection hatches with the right brackets, etc… It looks better, walks better and the area is totally clean now. It doesn’t look wrong anymore.

31st October 2015 – I have a wheelhouse in storage, and was planning on using it for the ‘Op Hoop van Zegen’. It is 2.60 meters wide and to large for the lemmeraak. To make sure what is left from the original den on deck, I started removing the floor in the wheelhouse.

Before I can remove the floor, I need to remove the walls. It did take some time, certainly when you have no power tools available. Back to the old fashioned way…

29th October 2015 – I received a copy of the registration documents from the Dutch Kadaster. There is some basic information on the vessel. Looking a bit further, I discovered she was built in 1916 as a fishing vessel. I even found a picture of her.

In the evening, I cleaned out most of the fuel. There are now some puddles left around in the bilges. I will need some old clothes to clean it out more properly; Sadly enough, the smell does stay in the ship and around it.

I had some time left, so I started emptying the engine room. I need a few drives with my van to empty everything. There is so much rubbish collected, I don’t know what to do. Sadly enough, I didn’t find anything useful yet…

27th October 2015 – Rubber gloves, a small bucket, a funnel, a torch and ten empty fuel cans. This is the equipment that I needed for one evening removing fuel from the bilges. It took me three hours and a few breaks to catch some fresh air. The positive side is I see some more bilges and some less fuel. A friend came to remove the old metal gangway. It was blocking all the windows on one side.

At the end of the evening, the lemmeraak was five cm higher on the water, so I did already remove a lot of rubbish!

25th October 2015 – Another day spent on painting. This time I did the kitchen area. By the end of the afternoon I was halfway and totally confused and high by the smell of the paint. I had to stop since I became to dizzy. The room is much brighter now and looks bigger. Every moment I have some time now, I will spent it on painting.

25th October 2015 – I came by car to collect all the barrels and buckets with rubbish. I have empty fuel containers on the Aquarel and will pick them up on a later date to clean the bilges. Once the smell will be gone, I hope I can start measuring and drawing plans. Being aboard at the moment is not that nice.

The engine room stayed dry and that’s nice to know. There is an old set of batteries, but they are disconnected. I hope I can reuse them to start the engine. There is an old generator aboard, probably a French engine from a car. No idea whether it will start, since the control panel is missing. 24th October 2015 – Happiness turns into a mixed feeling by entering the ship. I have been aboard several times in the past, but she hadn’t become any better. The fuel tanks had been leaking into the bilges. I can stay in the accommodation for around 10 minutes. I changed locks and started cleaning the inside of the ship. All rubbish went into big barrels and buckets. A close friend came and started laughing. After a while she realised how much work I was having… 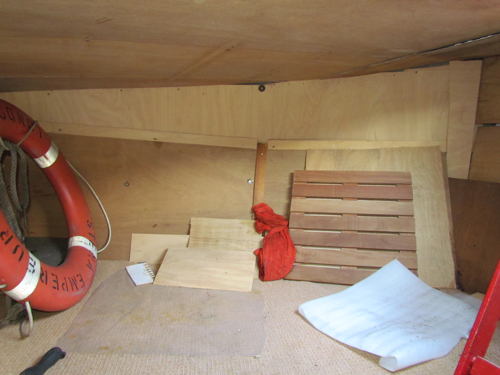 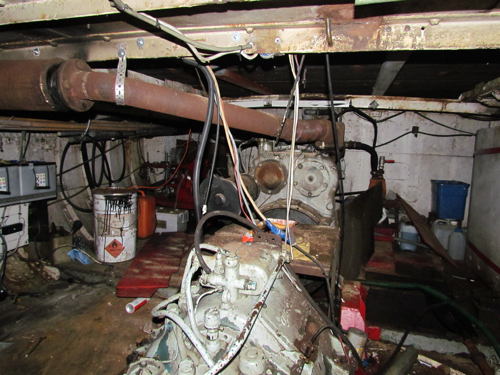 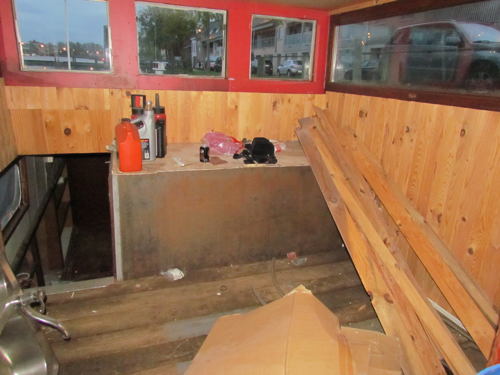 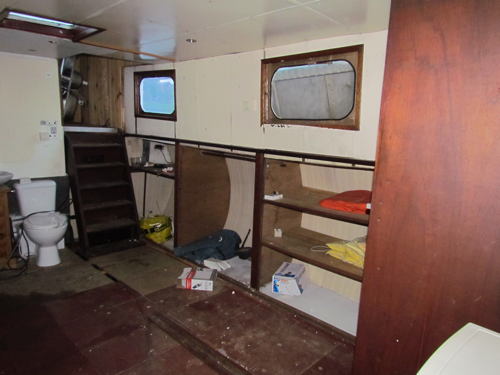 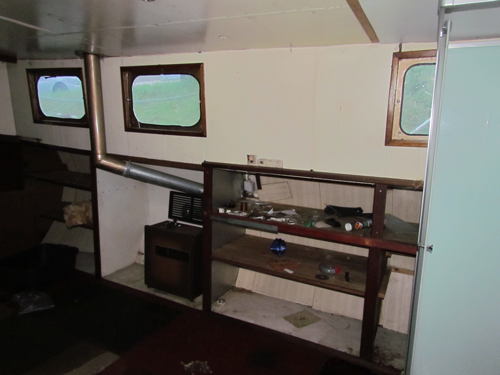 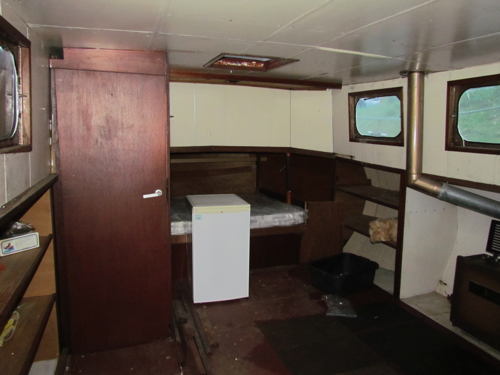 It was enough for the day. I took a shower and had a drink.

19th October 2015 – I’m trying to catch up again…. So far, I ave spent most of my time on the Aquarel. Working on several things the same time like the hold and the back accommodation. Also doing the plumbing.

18th October 2015 – My parents came to help me. I have my deadline to finish the hold by the end of December, so it only needs painting. Instead of continuing, I now started with the old accommodation at the back of the ship. Today my parents removed the old vanish while I did the second cupboard.

It takes me an average of two days to make something nice out of every cupboard. The wood behind the paneling is rotten or just gone. Last week, I put a bucket under one of the old windows because I felt some humidity. Today the bucket was full of water. So that window is definitely leaking . It took us some time to discover the leak and yes we found it.

I removed all the silicon and paint. The windows is now covered with a bug plastic sail and some tape. It must dry out before I start repairing it. It might also explain why I had water in the bilges underneath the old accommodation… 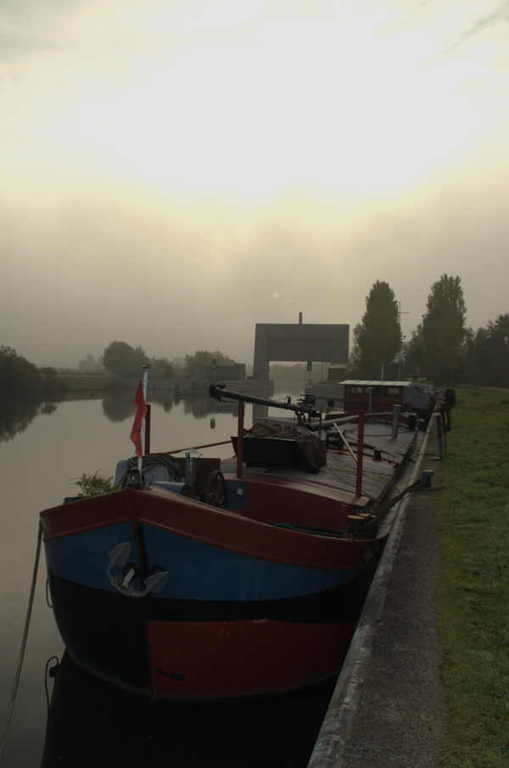 14th October 2015 – I still had one load of wood left on the Watergeus, around 20 sheets of multiplex and some t&g. I cut the sheets the right size and transported them to the Aquarel. This are the moments you love your van….

Nostalgia: a wooden minesweeper in Bruges

14th October 2015 – Part of a long gone past, they towed an old minesweeper from Ostend to Bruges. I’ve known her as a minesweeper, a ship from the Scouting in Ostend, a private conversion and now as a poor empty hull. 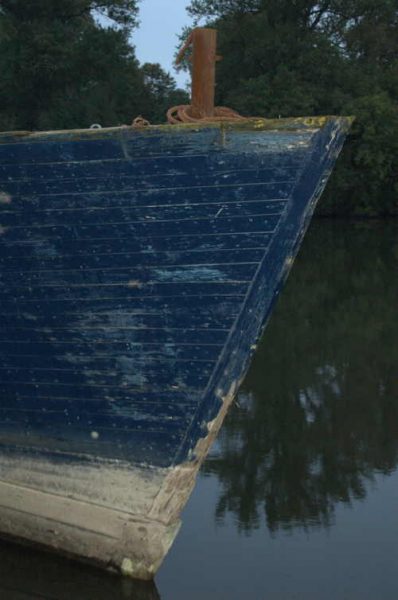 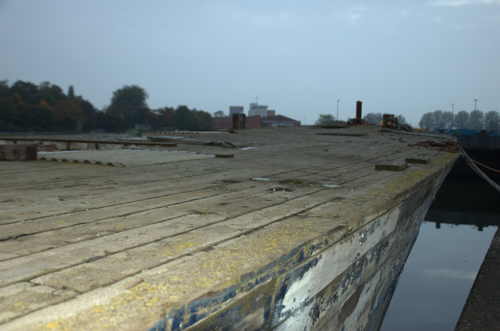 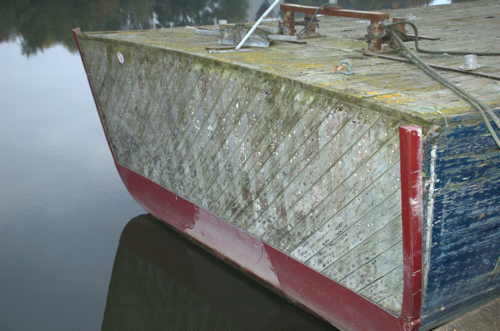 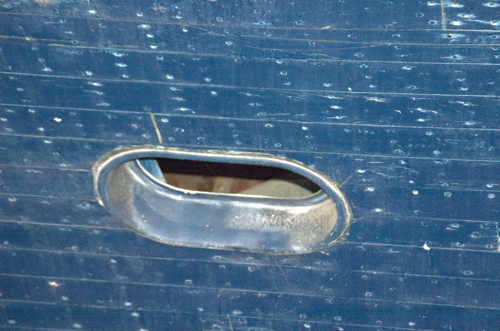 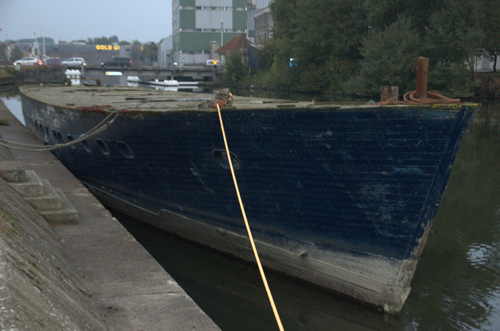 13th October 2015 – I love to have a working toilet aboard the Aquarel. It gives some basic comfort. I have now the original bedroom that is clean and repaired, or should I just call it rebuild.

This evening I did some of the plumbing. I never like these kind of jobs, so to finish the evening, I did the remaining painting in the cupboard in the old accommodation.

11th October 2015 – It has been a long time ago, I worked three days in a row on the ship. The next area to finish is the bathroom. I only had a few hours, but I’m getting there. It is a bit more work then estimated, but nothing I can’t handle at the moment. All the water pipes are now behind the walls, ready to be connected. They are out of the way, which gives me more space to walk around. At the moment, I want to have as much free space as possible since next Wednesday I’m going to load my ship with some fresh wood that is still stored on deck at the Watergeus. 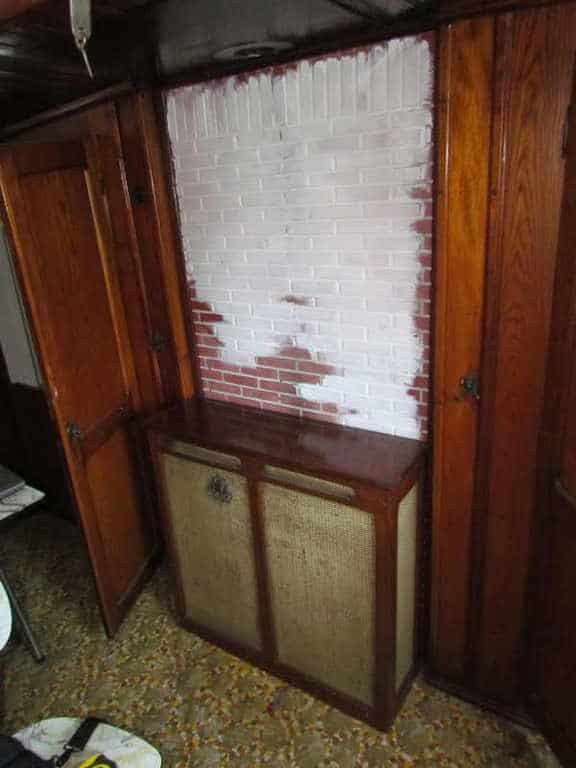 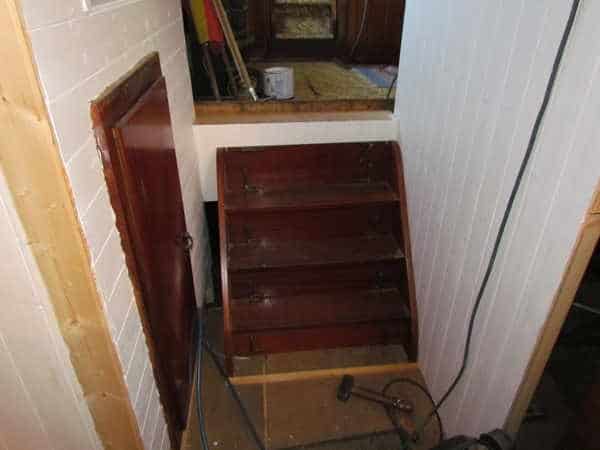 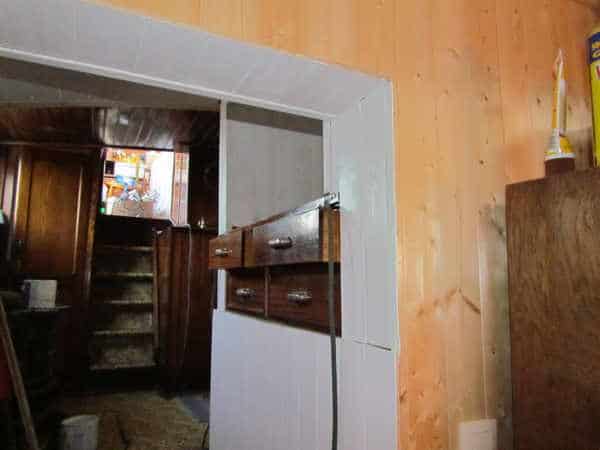 Aquarel – Breaking down the kitchen

9th October 2015 – It is a hard period for me. Motivation is one of the things I’m missing at the moment, just like some joy from the work I’m doing at the moment. If I don’t continue working, the project will take to long. I made a deadline, the hold should be ready by May 2016. Sounds acceptable, but when you walk around, there are so many small issues that needs sorting out. I don’t know anymore…

I ripped out the kitchen unit I built last year. I started doubting during the construction of it and a close friend recommended me removing it. It looked wrong, she said. Removing something I have built is a major job. Nails, screws, glue and silicon. It was that strong it survived hits from a sledge hammer. By the time I was finished, it took me another hour to repair the wall behind and make it look like there had never been a kitchen before.

While breaking down the kitchen, my mother painted the hall to get into the hold from the old accommodation. The old accommodation is a separate project, but we decided to clean out one wardrobe. Most of the wood was rotten, so I took it all out. What was left is now protected against woodworm and has been fixated as well. It would be nice to reuse the whole back accommodation one day.

My bedroom got a second coat of paint and some other small jobs were done today. 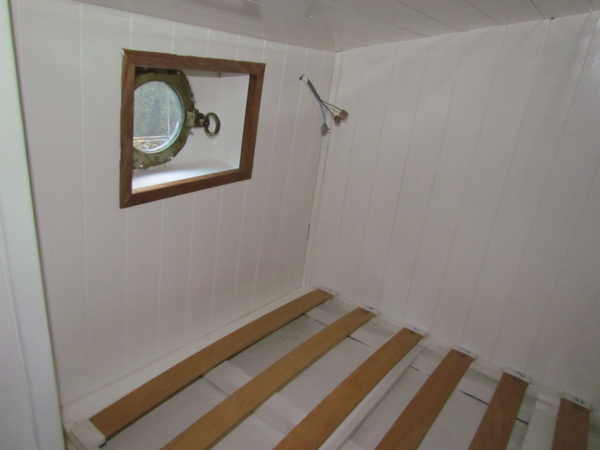 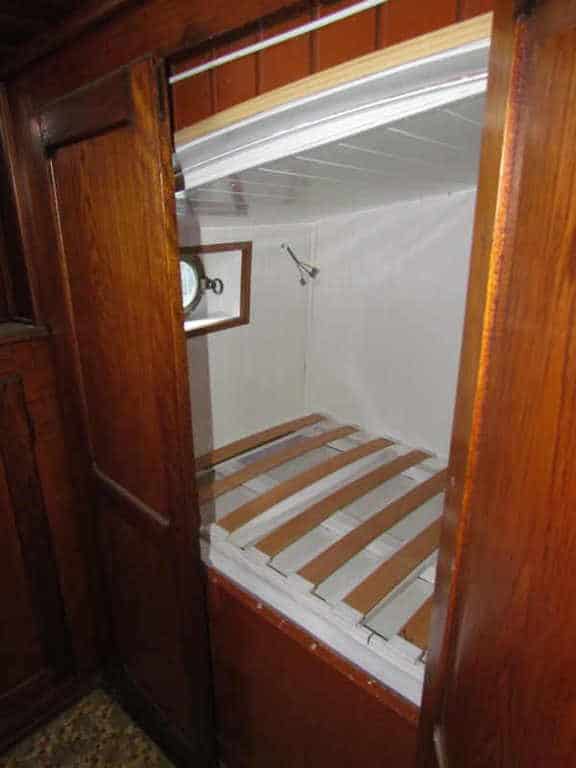 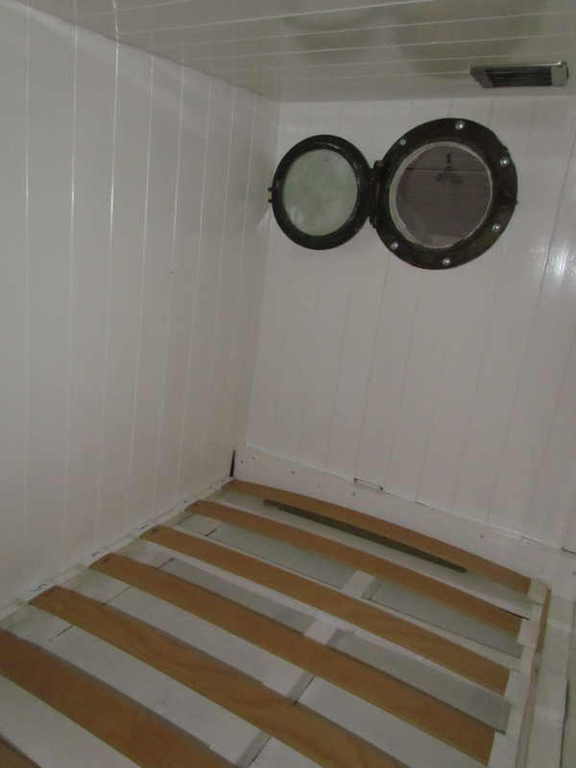