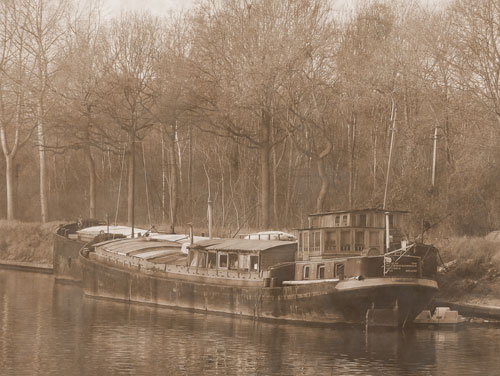 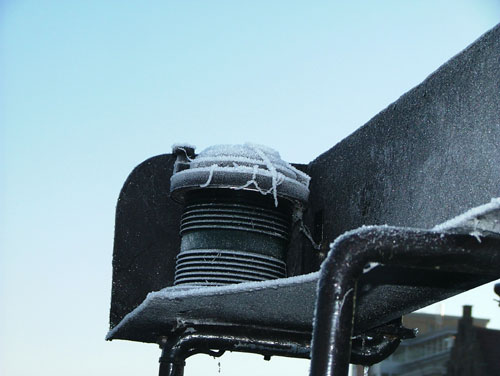 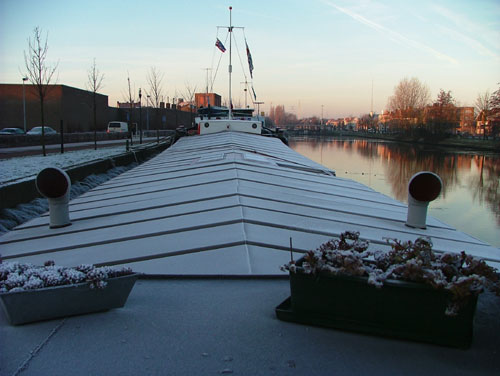 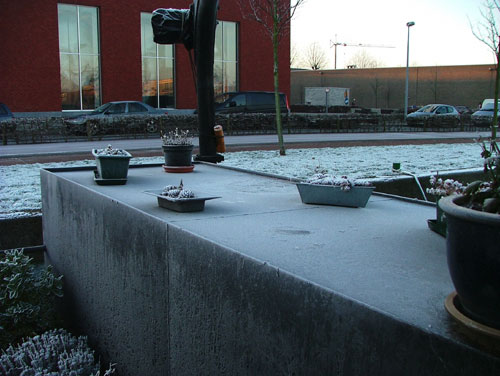 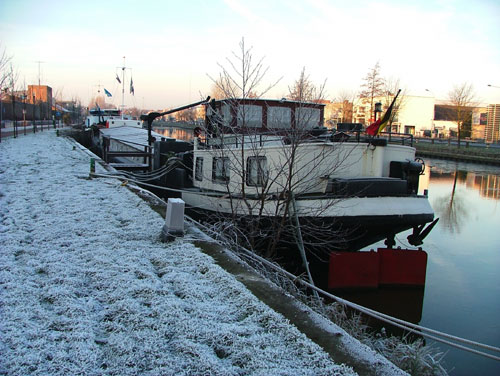 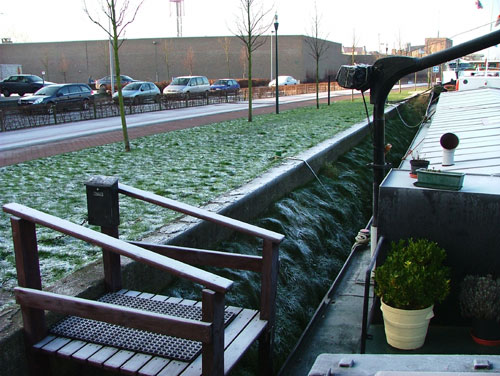 Watergeus – Line oil for the hold

18th December 2007 – Freezing during the day, extremely cold at the moment. In the afternoon I put some oil on the metal in the cargo hold. Later I tried to fill my watertanks and these of my neighbour, but without success. All the hoses were frozen. We walked around to ask our neighbours in the area, but all of them still had water in them so not useful at all. Many of the people had to put on an extra fire, like for their washing machine, engine, etc… 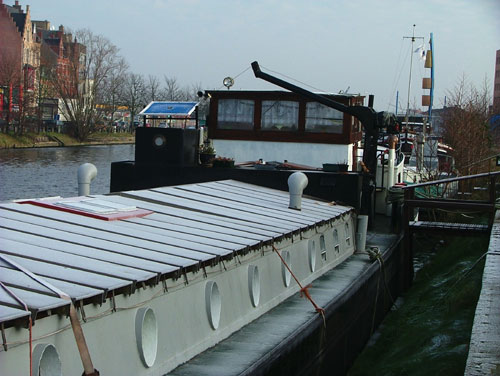 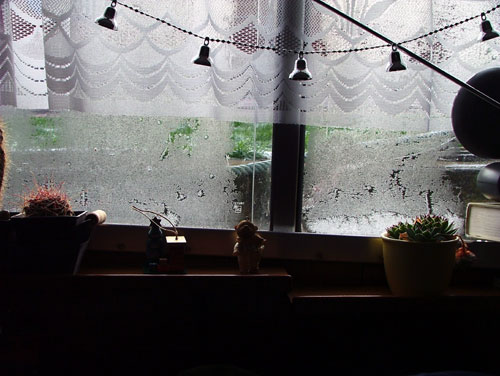 The condensation in the fore accommodation was frozen as well. And the winter just started.

At the other hand I have taken some pictures, which will be used as a Christmas card background. So every negative element has a positive side as well.

Besides complaining about the cold, I painted some of the roof in the cargo hold with line-oil. This prevents the metal from rusting, also on a long term when insulation is in front of the metal. Oil prevents air and water to get in direct contact with the metal. Line oil is not that expensive if you know how well it protects your hull and metal. It can take up to three weeks or even longer to dry completely, therefore was now the moment to start working on it.

Later that day, I placed a mail box on the wooden gangway.

17th December 2007 – As an annual tradition every year I go to London to meet some people over there who have a house boat. The Brentford area is very interesting. Not only do I know most barges over there, it has a wide variation of vessels, a small yard and some (floating) relics. 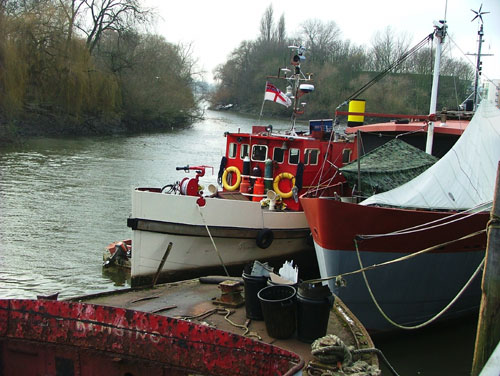 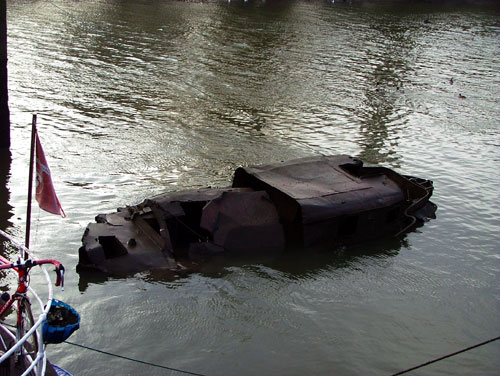 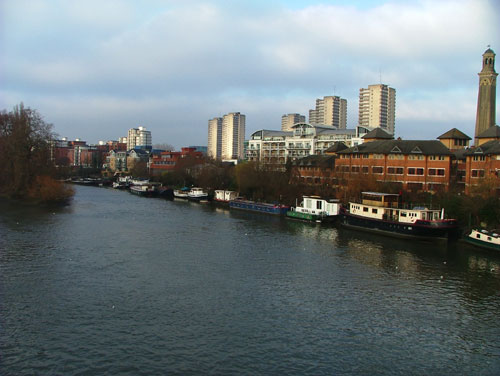 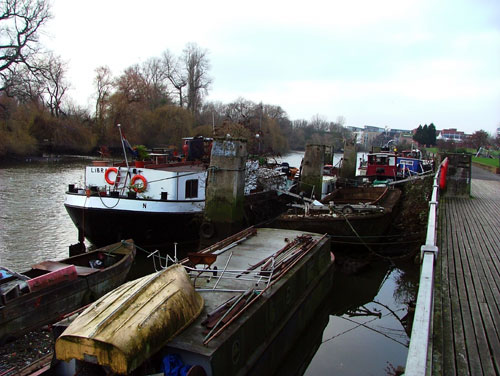 I visited an old coastal ferry that was converted into a houseboat. I was surprised of the space there was aboard and the way the man managed to create a nice accommodation. Furthermore, I went to the Libra, a shortened Kempenaar. While helping the owner with a few smaller jobs, I decided to take a few detail shoots of a London Thames lighter and how it was build.

15th December 2007 – Very early we left for Sluiskil to go and get the little boat at the scrapyard. I mainly joined as a spare crew member and photographer, a job I’ve don well. The other job, a crew member seemed necessary as well, but that’s another story!

When we arrived, the engine of the ship (Dolfijn, a kempenaar from 1957 and sister ship of the Libra) was already running. Undoing the ropes and we set sail to Ghent. In 1,5 hours we were at the scrapyard. I felt bad seeing so many ships I knew, like the trawler from Sluiskil, the Sabrina, my first ship I visited for buying, a commercial Kempenaar, a spits barge from Ghent and the boat we had to take. Behind us, a big pile of wood, once 6 MSO-minesweepers.

We pulled the little ship out by hand, then had to open the gate, which hold oil and rubbish from floating in the canal, and pull her alongside the Dolfijn. After this job was finished, they gave me a little time to take some more pictures.

15 minutes later, we sailed back and now to Terneuzen. Since I’m planning to go on course to learn to sail, I sailed with the Dolfijn and other boat. I’m used to a wheel steering, but working with this ship was hard, not on pilot, but when he switched off the pilot it became to difficult.

After mooring the little boat in Terneuzen, we sailed back to Sluiskil and took a break. Both of us were broken. We drove the car to Terneuzen, moored the little ship properly and went home.

Once arrived at the barge, I had to refill the fire with petrol, fill the water tanks, and did some other jobs. I believe I will sleep good this night, part of a great day that has passed!

Having a drink in Sluiskil

14th December 2007 – It was a month since I last went to Sluiskil, so I decided to have a go. The intention was to go and help repairing an engine for a friend of mine who recently bought a ship. In Sluiskil, we had some issues with the custom services, since my friend was driving a British car. This caused us some time. I helped for one hour on the engine and then decided to visit some friends, take a couple of pictures and drink a lot of  beer.

Before I realized it was dark!

Tomorrow we are moving an Amsterdammer from the scrapyard to Terneuzen to restore it. So we made some plans and arrangements on how this will be done, since the ship has no engine.

12th December 2007 – Was a very busy day for the lock in Bruges, four ships at once in the lock. hadn’t seen that much before. I noticed my hatches had moved again, so I made it even more tighter. The stronger I make it, the uglier it looks, but I prefer to still have my hatches next summer as well, so I’ve done an extra effort now.

9th December 2007 – There was a meeting with all the people of the house boats in the dock. What I found interesting was to meet the new people who bought one of the original remaining sleepspitsen from Baasrode, a well known yard for spits barges in Belgium.

5th December 2007 – A friend of mine wanted to try some hatches on her barge to see if it would work out. I knew before I started they were fine, but she wanted to try it anyway. A barge with hatches always looks nicer then one without…

1st December 2007 – Done several smaller jobs, like putting electricity in my new small office space, sorting out my tools and starting to clean the engine room. This job I just gave up after a few hours. It was cold and I didn’t have my hoover, so I just started doing it by hand and a small hand pump. I removed some 120 liters and quit doing it. I’ll see it another time…

A man, a little further in the dock, is cleaning his ship and I received some old ship tools, nice for decoration and a few are still useful for working today. It makes my ship again a bit more of museum (or to some people a rubbish field).

In the afternoon some more furniture arrived and went. I decided to remove the metal table in the old accommodation and replace it with a wooden one. In the cargo hold I put a metal box with tools.

I also decorated with some small Christmas stuff. It is early, but I just wanted to do it. If I remember last year, I were still working on the cargo hold and the new den, I believe I made some good progress this year! 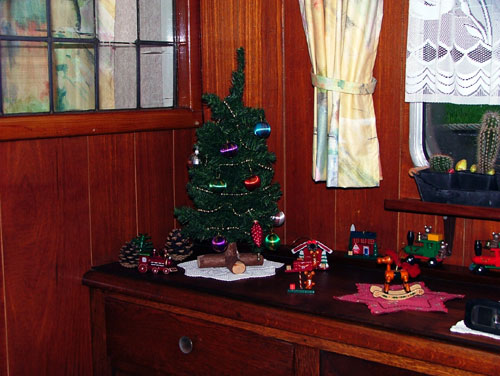 By the end of the day I was broken, but hadn’t done a major job…