28th April 2009 – Since we didn’t have all the pieces for the water system, the tanks were connected to the pump and that’s it for the plumbing today.

I started building the first wall in the forecastle. I tried a few possibilities and ideas since I want to have the maximum of space out of this small area. When it was dark I had to stop working, but at least half of a frame is standing.

26th April 2009 – The first step in creating a nice space in the fore peak is building a decent floor. The previous one were a few sheets of multiplex wood on rotten pine with wood worm. The old floor was removed a few months ago and the bilges were cleaned. The new floor is a solid construction and the base for the further conversion. 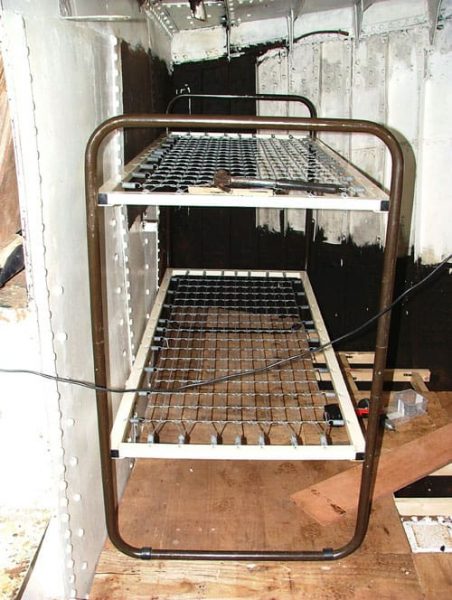 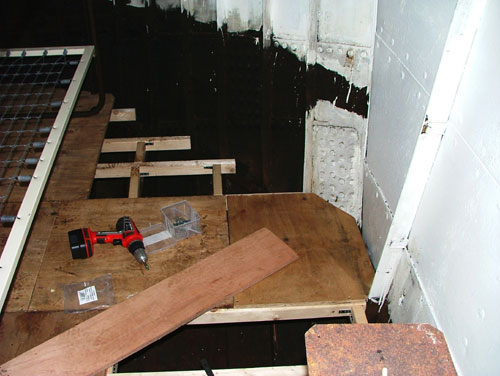 25th April 2009 – Yesterday evening we started talking about possible ways to connect the different systems. Today it was the moment to start. It took us several hours to look for the pieces we needed and only an hour to connect them. 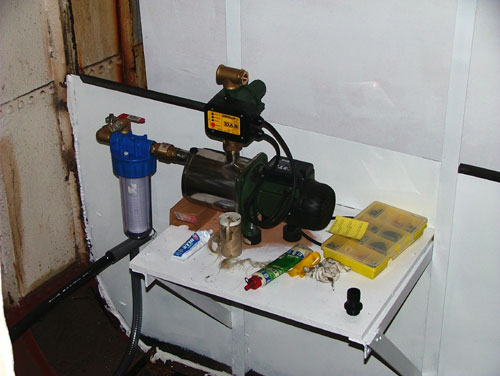 20th April 2009 – The workbench was lowered in the technical area. Since I have no strength in my right wrist, I built a system of little winches so I could lower the bench from the front cabin to the technical room.

19th April 2009 – Somewhere the coming week we would connect the watertanks and pump.

Therefore we wanted to finish the ceiling and walls of this reasonable big room. A metal plate had to be moved, a fuel tank and some other heavy stuff.

After this had been gone, I could start building the walls. By the end of the evening one wall was done and two plates were mounted as ceiling. It was a bit disappointing that we could only get that far, but at least it looks tidy and it will be easier to work in this area now.

18th April 2009 – Today we continued and finished the ceiling of the living room. With this done, you see no more metal, insulation or damp foil. It gives a more finishing touch.

Julie back from the yard

17th April 2009 – Yesterday, The Julie was launched in the water and today we brought her back to Bruges. The hull was nicely painted, and if it wasn’t for the the weather, it would have been a perfect day. 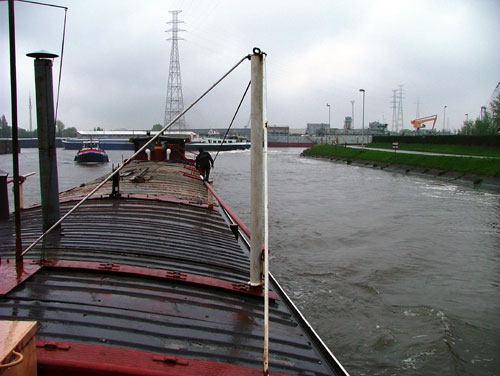 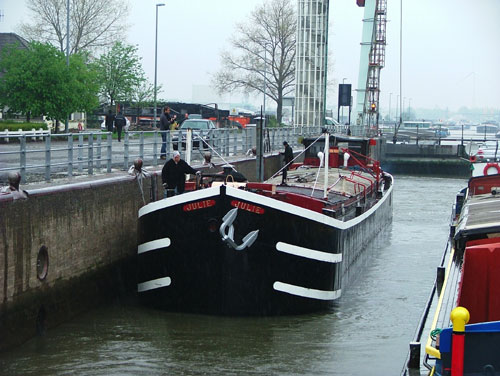 Watergeus – There goes my storage space: Cleaning a hold

13th April 2009 – My neighbour is preparing her ship for a yard visit. One of the jobs was to clean her hold since water needs to be pumped in as ballast. Since a lot of my stuff is stored in her hold, it had to be taken out.

Once out, I still had to find the space myself. Not easy while converting a ship. 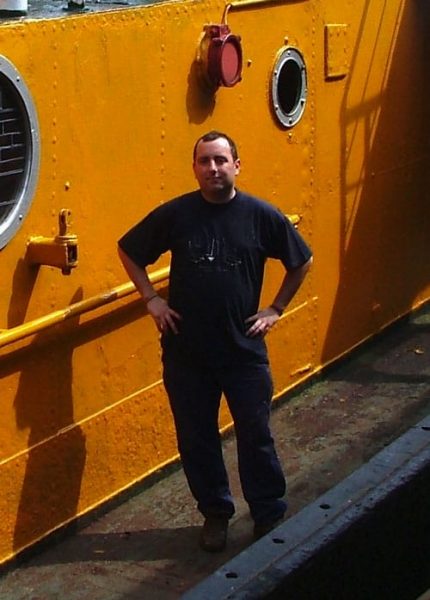 11th April 2009 – The area where the pump and watertanks are stored is called technical area #2. In a few weeks time, we will finally connect the tanks. There is no insulation in that room, so I decided to change this. We made the wall to the living area insulated and the roof. Since it was over 35°C in that room, we had to stop working after a while. Every hole we drilled in the metal was becoming harder and harder.

9th April 2009 – In the front technical area where the watertanks and pump are stored, there was a big sheet of metal. It was cut out of the roof when the big skylight was built. I stored it in the front when there were no walls in the hold. Now, two years later, I still had that plate and it had to get out of the boat.

It took me an hour to cut the sheet and put the pieces together. They were to heavy to get out by one person, but at least they now fit through the small door of the front accommodation.

Watergeus – Ceiling of the living room part one

4th April 2009 – We added some supports for the ceiling to hold. This was the hardest job. Adding the den tongue and groove wood was easy. By the end of the evening, half of it was done. 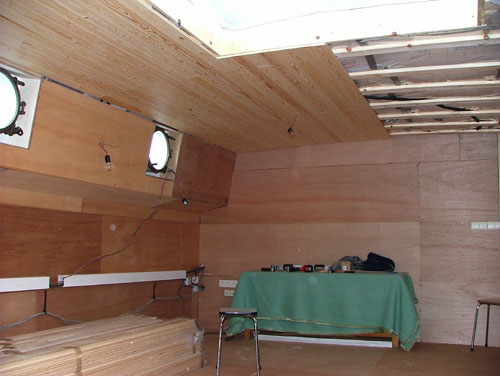 Sailing aboard the Vrouwe Janingje

3th April 2009 – The last day of the course was a practical one. We went out sailing on the Oosterschelde aboard an IJselaak from 1911. 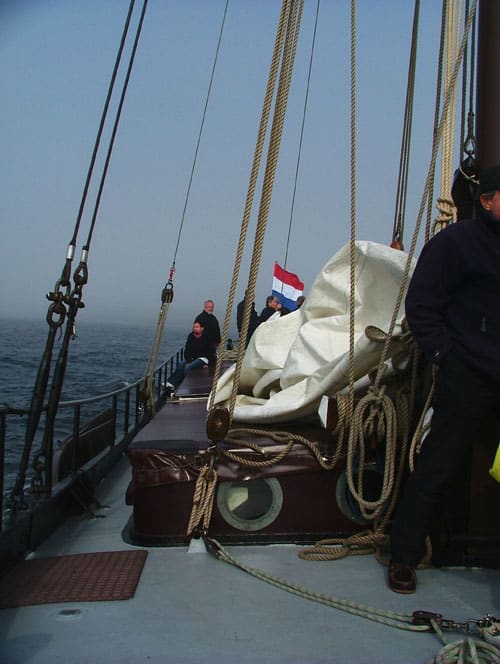 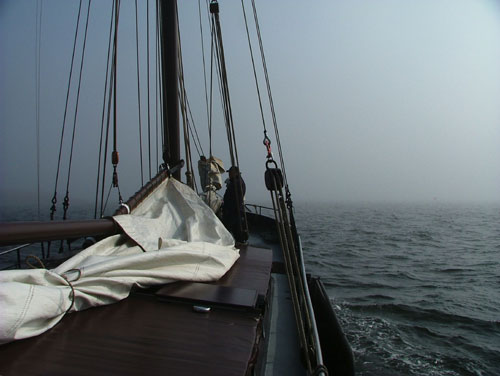 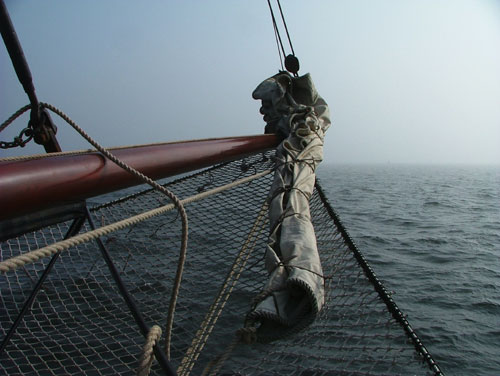 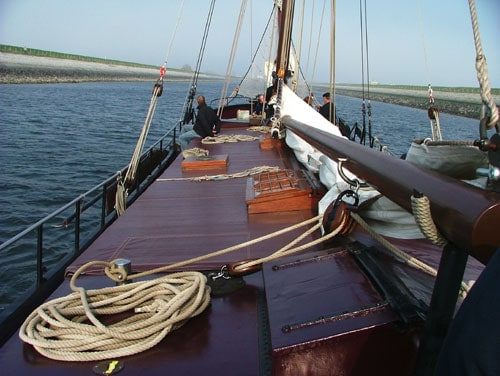 1st April – 3th April 2009 – Three days I spent in Zierikzee to follow a ‘maten’ course. This course is the basic information you need to work on a charter ship in the Netherlands. 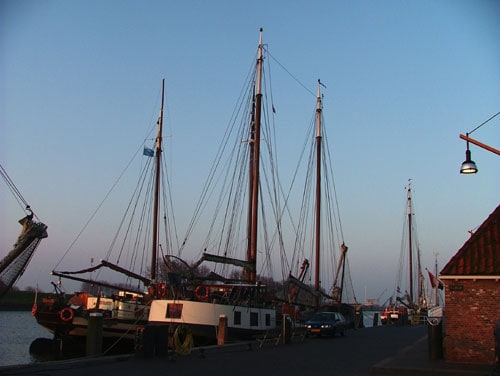 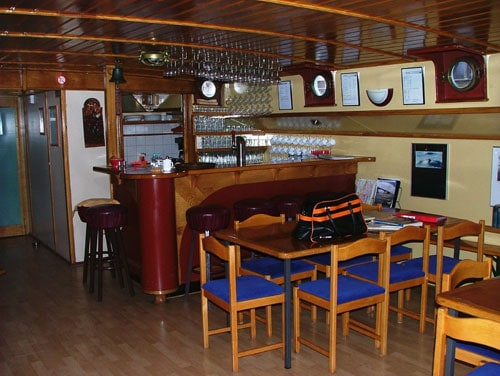 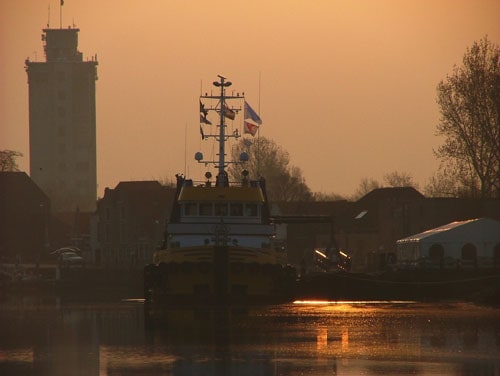 It were three very intensive but also fascinating days. You learn a lot in three days.