20th September 2015 – The idea was to work a whole day. Sadly enough, the evening before was a late one and I had a small hang over. I continued with the water system. I have now done the big runs with the pipes. It did take me much more time then expected, certainly when you are on your own. Now the pipes are done, I can concentrate on finishing the last side of the hold putting wood and t&g. Once this is over, most woodwork will be done. 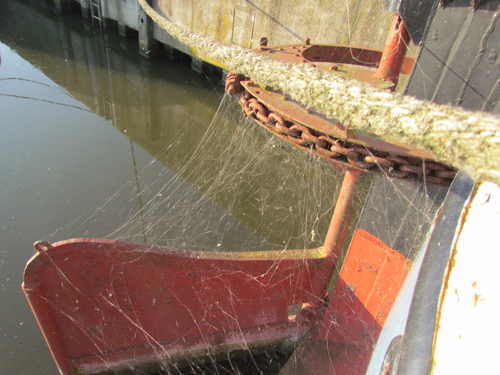 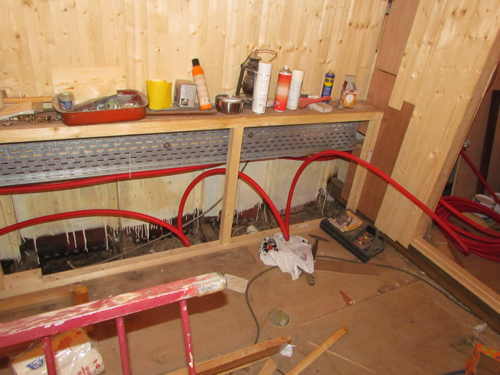 13th September 2015 – I have never felt so bad for a long period. On arrival at the Aquarel I decided to sleep and so I did the whole day. There is a photo shoot on my ship tomorrow and I wanted to clean it up. They will have to live with it…

11th September 2015 – Every few weeks I try to work a whole day fixing different things at once. Today I painted a side of the den and a part of the deck. 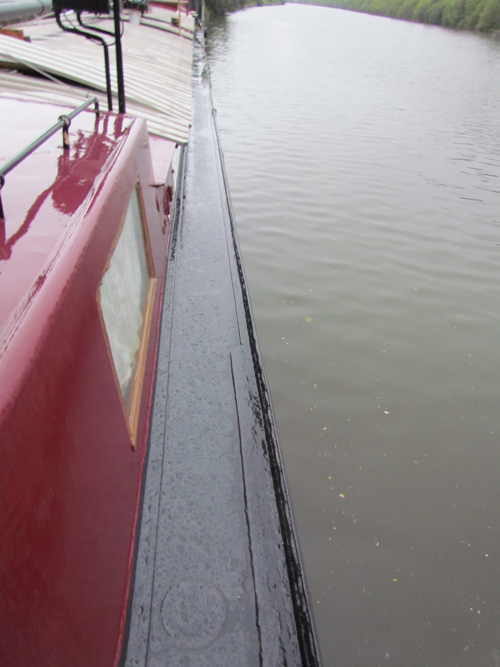 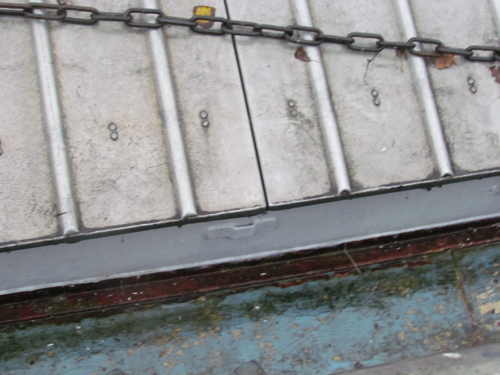 Aquarel – Doubts on the kitchen

5th September 2015 – I had some doubts on my kitchen. When I built it, I didn’t like it. I still don’t like it now, and several people gave me the advice to remove it. Saturday morning, a good friend came and she advised me to replace it. She was the first person to see it in real and not on a picture. In some ways it is a shame since I did spent several days building that kitchen. It was a remake from the original kitchen of another spits barge.

It saves me work breaking down the current unfinished kitchen and putting one from IKEA. I can build an IKEA kitchen in one to two days, finishing the current kitchen would have taken over a week. 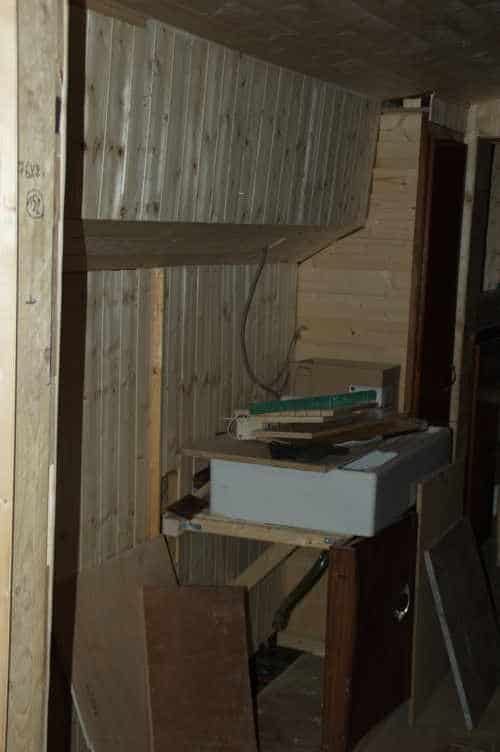 I’m no good with designing kitchens anyway, when the Watergeus was nearly ready, friends also told me to change it and luckily I did….

I need a big door to get to the boiler and pumps. I reused the kitchen door in the hold. It has the same pattern as the toilet door and now makes a nice combination. Never throw something away, it will always be useful one day! 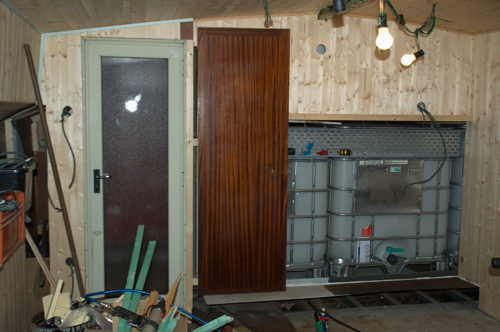 It is fine when people come to have a look for the first time. If they ever come back, they are often surprised to see what has become of it. The little girl who came to have a look with her mother described the hold as a place where a bomb had exploded. And she was totally right. It is one big mess at the moment and it didn’t became any better after breaking down the kitchen.

At the moment, I’m finishing corner by corner. I’m now also hovering the floor to get a better idea of the space. It is motivating me every time I can throw away some stuff I can no longer use. 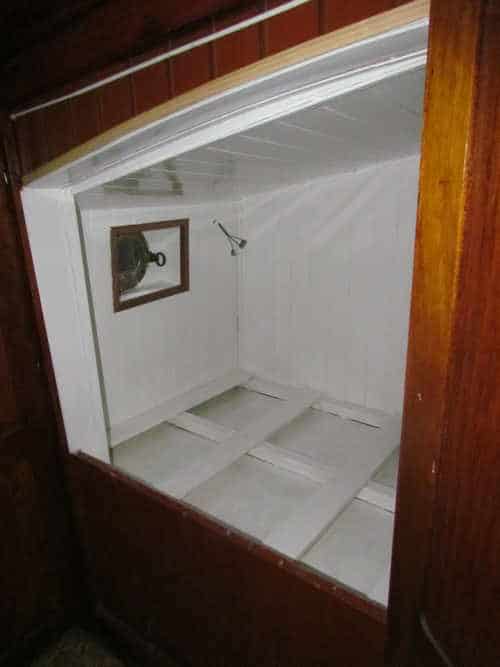 5th September 2015 – We had the chance to join for a trip on the Spits barge Low Budget. Mildred came with her kid, so we decided to get off at Beernem. Any longer is boring for a child and even me…

I showed her the Aquarel and the progress on the conversion. 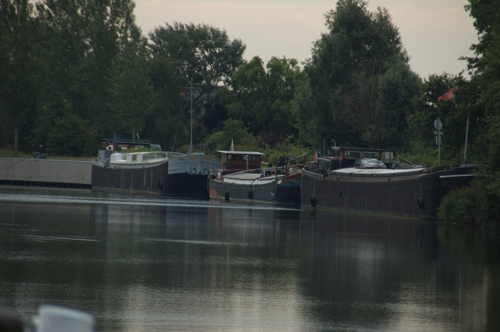 3rd September 2015 – As mentioned before I hate plumbing. The fitting I drilled through the hull had been leaking. Not much, but a ship should be dry and so I asked my neighbour to help. With the two of us I was able to give a few more turns and tighten it up. A new layer of silicon and it was dry!

One wall in the toilet had to finished, so I did.

1st September 2015 – Drilling and cutting holes. I normally make one hole a day in my ship so I can check whether it stays dry or it leaks. Since I’m short of time and I want to keep my schedule as planned, I cut one hole in the side and mounted my chimney for the heather. 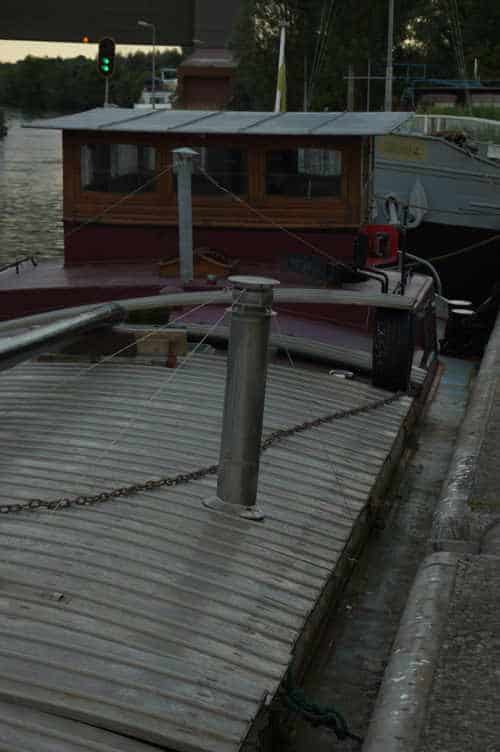