30th September 2007 – Today we went to Antwerp to visit some Dutch vessels in a steam event. Well indeed we organise a steam event, but don’t have any steamboat left as far as I can remember. 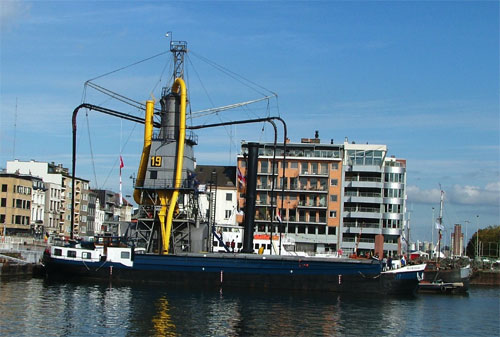 I made a trip on a Dutch steam tug. I didn’t have any words after I left the ship. Unique, magnificent, wonderful. A tug powered by coal. It was over 35° in the engine room and I stayed there to watch the man working. He could talk about it with so much enthusiasm, I wanted to do it myself straight away. I know what I’m missing on my ship…. 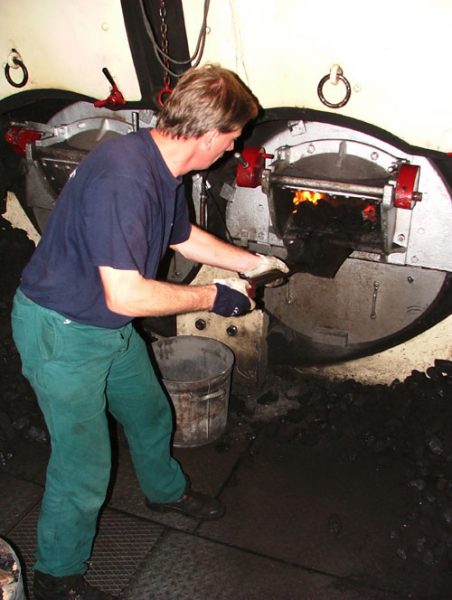 Next to the grain elevator, I noticed a friend of mine. He was there with his (commercial trading) barge, loading grain to show the people how it used to work. We started talking. Last year I wanted to buy his old coal cabin, but he didn’t have the time removing it. He plans doing it next year. Sad, but hey not many spits barges from 1927 are still trading!

29th September 2007 – Paint is one of the most expensive costs on a boat. Since I have the boat, I had used several brands of paint, all what I found and got has been used by now. The final coat needs to be good, so I bought some paint. Didn’t have much paint for a few hundred Euros.

In the afternoon I continued hovering out the bilges and removing some more of the floor to get to the bilges. There are still a few buckets left. Most of it is drying out nicely, but if there is too much, it just stays. 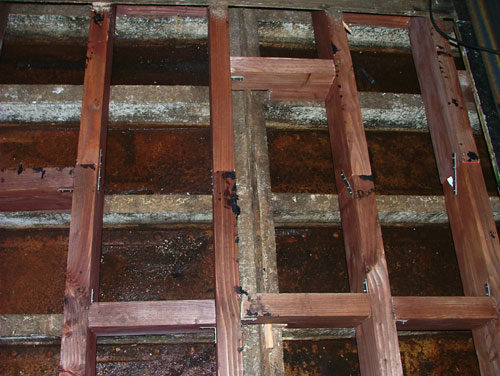 While walking along the quay I noticed the boat in the front is back after nearly a year. A Dutch tjalk called Arriver is back. A small, but nice ship. It has a sign for sale. Nice, but to small to live on I believe. So this makes us three Dutch barges in the dock, the tjalk, my neigbour with his Katwijker and me with my Luxe Motor.

27th September 2007 – No welding today, as most of the week the weather is real bad. Sad to have such a bad year, I had hoped to be much further by now. Well, maybe next year is better. Then at least I have some money again. 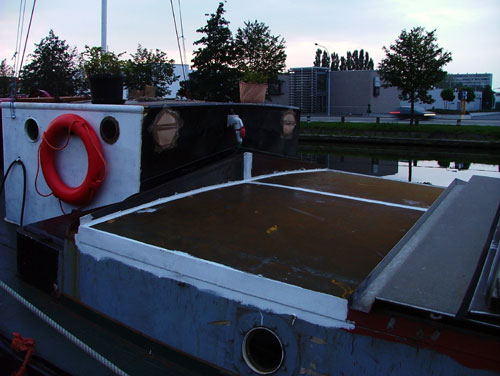 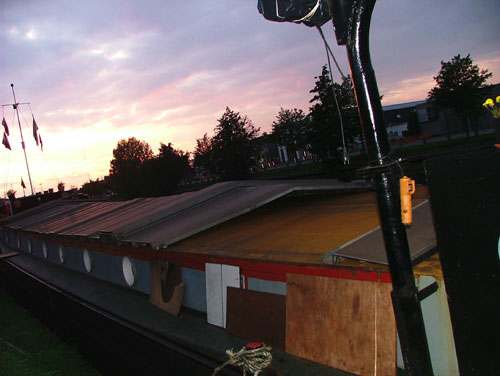 25th September 2007 – The man finished most of the roof by now. He welded the other end of the roof, so by now if it rains, it should no longer enter the boat. Next week he will weld the other side where a strip of 10cm was welded. Also the inside needs a second weld. I can already see the end of phase 1.

24th September 2007 – I don’t have the feeling for working today, it was too good yesterday…. Besides my stomach, the weather was terrible as well. A lot of rain, so no option for welding. The weather tomorrow is even worse, so I’ve decided to work again and change my holidays to another period, maybe next week.

I hovered some of the bilges, most of it is drying quickly, not bad. But I forgot to close the portholes, so I t rained again inside. Oh what do I love to be summer again…

23rd September 2007 – Today, there was a big event for the Flemish House boat society in Ghent. They did not only change their name to Flemish instead of Ghent, there was a brunch and a list of items that will change as the negotiations with the Government go along. If these are positive, I don’t think so, but we will have to wait. I did have the chance to meet some nice people.

In the afternoon we moved along the docks and Canals in Ghent through little boats with outboards. So I have a nice collection of pictures from ships seen from the waterline. While sailing, taking pictures, there was still some time for drinking. Fun was over when batteries of camera were empty, just like the bottles.

I noticed a luxe motor being converted; I’m holding my heart to see how it will be adopted to the 21st Century. I agree on modernism, but often in Ghent it goes way to far. This is also an argument of the Government. Once a houseboat has a mooring, the owners often convert the boat and it makes a complete change in view, for the landscape, the boat and the people living around in the houses. People like me, who only built a roof under the hatches are having trouble doing these works on location because of the other people. It also causes more paperwork and we need these days permission before changing the boat.

22nd September 2007 – In the morning I hovered out some more water from the bilges. I cleaned the cargo hold, it was getting time. Everywhere were electrodes, broke glass from that window, dust, etc…

In the late afternoon my friends from Sluiskil who built the boat came. We had a small meal and a few drinks on the deck. Probably the best day of the year and the last one. Till 9 o’clock it was good weather, then it became dark. They also helped me mooring the boat better. At the back the ropes were a bit loose and bashing to the accommodation causing damage to the paint. Since I have to much trouble with my hand I decided to let them do it. In no time it was done and the boat was stable again.

Watergeus – Putting back the hatches

21st September 2007 – The whole roof is welded, three times 23 meters, twice at the sides and once in the middle. He welded the last bits today. The next step will be to close the gaps at the front and back.

In the evening we placed the hatches back in the right order. Fortunately they were numbered. We discovered having not enough hatches when arriving at the front of the boat. 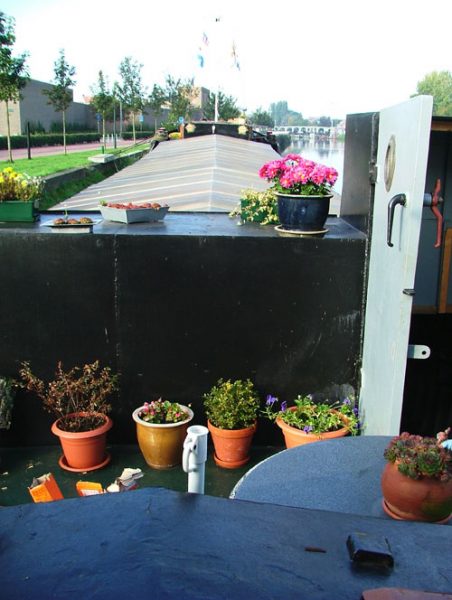 I worked it out after working for two hours. Since the hatches used to be placed under tension and the den was not right, the hatches had to be moved and lifted before the bolts fitted. So I had enough hatches. It is hard to explain how I did it, but is even harder to do it again.

20th September 2007 – He welded further on the sides of the roof. It should now be drier if it rains. Seeing first, then believing. 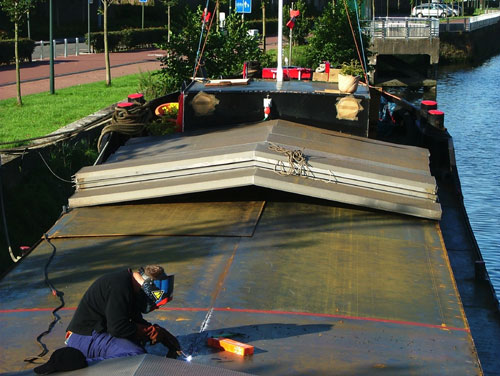 I’m starting to miss the idea of opening a hatch. I remember in April when I was in Amsterdam, somebody said it is great to have a metal roof, but make sure you can open something. Well she was right. I talked to the man of the yard wether the skylight could be made so something can open.

The design slighty changed and now the whole skylight can open. It will take at least two people to open it, but hey in summertime (if we ever have it again) it is great to have some fresh air inside the boat and living accommodation.

19th September 2007 – I believe the coming days won’t be much to write about. Welding is a boring job that is taking a lot of time. Depending on what to weld, it takes around two hours for welding 1.5 meters. Often he welds more in that time, but if the gaps are to big he needs to add more metal and weld it twice.

18th September 2007 – Again heavy raining, the same as yesterday. Difference today was that it was light in the cargo hold. All buckets were running over, bilges filled with water…. Something I didn’t notice yesterday. Only If I would have known then.

I hovered out the bilges and more then 100 buckets were emptied over board. Still I don’t see the difference, a real disaster. If I would have used gyproc plates I could have thrown them all away. Therefore it is important to only use wood that is waterproof or survives for a period in water. Also make your interior ready to be easily removed in case of emergency. I only had to undo a few screws and I could see and touch the bilges.

17th September 2007 – Raining today and not light rain! Couldn’t work so I wrote a few articles on the history of barges for a Dutch project. Many people often says when a commercial barge ends up in the recreation, it is lost.

Now I believe in many cases the boat is saved. Therefore am I writing about house boats ‘ history for a website called Binnenvaarttaal. The boats I have written are Libra, Watergeus, Cawcher-V and Arma. I tried three times to go outside and start working, but useless, to much rain.

16th September 2007 – Last weekend I really enjoyed the waterways around Furnes that I decided to have a look at Diksmuide. I would love to sail there one day, I don’t know when yet or with what boat. Sadly there were not many house boats around, 1 only and it was an alternative restaurant, so was the boat. 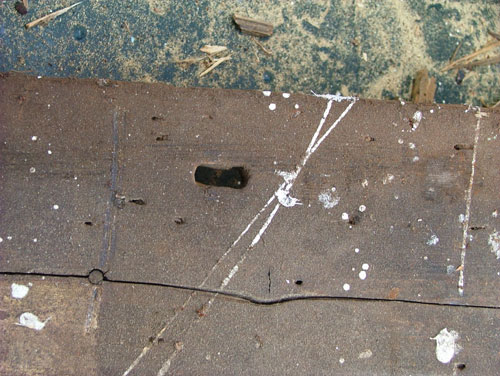 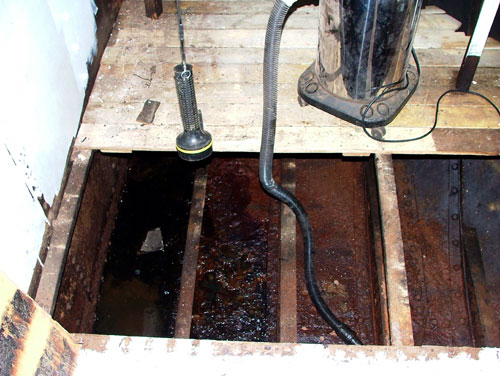 14th September 2007 – While the man was welding the roof, I cleaned the rest of the front space. I called a friend to know if he was interested in a deal with scrap. When he agreed all metal pieces left in the front and back of the boat were put on deck. It is something between 750kg and 1000kg I believe. We’ll bring it away tomorrow. 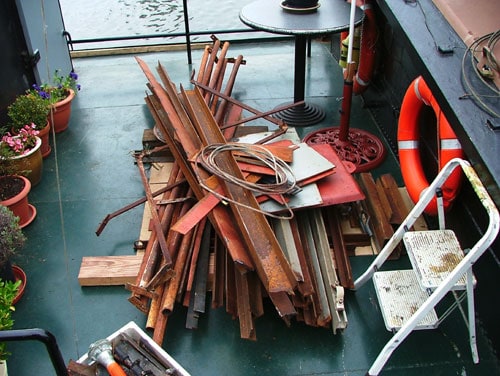