30th April 2010 – The sail was nearly gone, so I bought a small party tent. I should have done this straight away.

29th April 2010 – The hatch was delivered for the entrance of the storage area. The brackets were welded and the hatch mounted. The supports for the ‘stoeltjes’ for a gangway were bolted on the den. In the evening I painted the hatch and it’s cover. 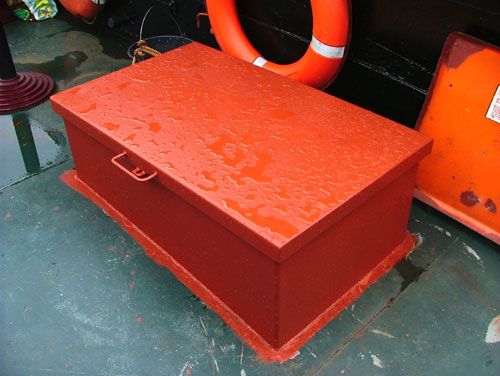 The chairs were a little to thick for the supports, so I had to narrow them down a bit with a grinder. I have always used glasses to do such a work and so I did this evening. Only a piece of metal got under the glasses in my eyes. I had to stop working, but luckily the metal go out my eye reasonable quickly. I believe this is one of the most scary moments in the last years. 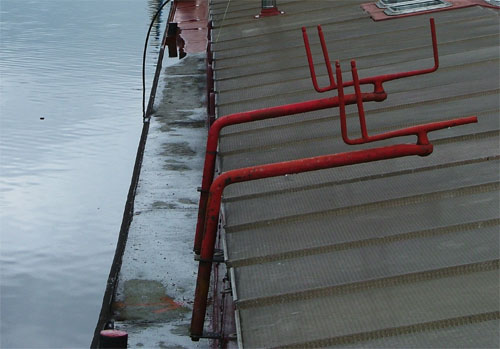 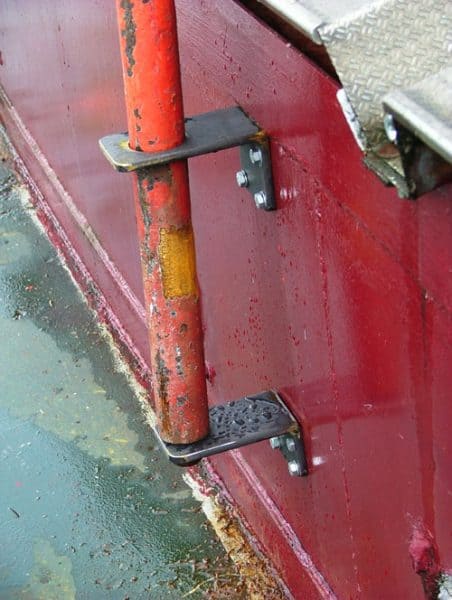 It had been raining and the construction barely held it. I’m looking for another solution.

28th April 2010 – Nice weather is over, they are talking about bad weather for the coming weekend. So I decided to make a construction over the wheelhouse towards the entrance of the hold. The framework was solid, but that’s it. I used an old sail as cover.

27th April 2010 – The whole afternoon and evening, I continued cleaning my deck. It now looks good, a whole side has nearly been done. Since I’m having a party on Saturday for friends and girlfriend I want to have a nice looking boat. 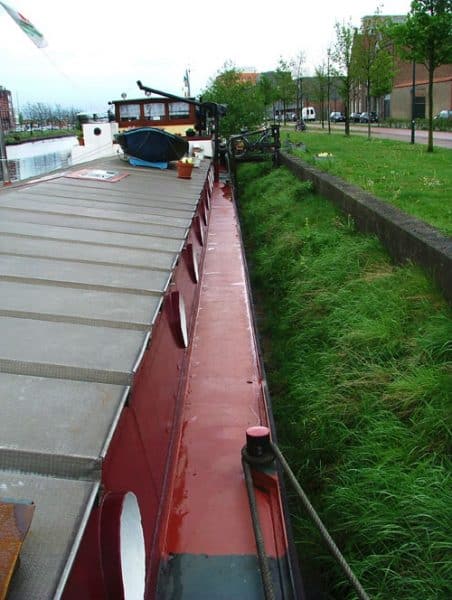 24th April 2010 – I started cleaning the storage area where the hatch was built since a lot of dust came down while making the hole for the entrance.

In the afternoon I used my new water pump to clean the whole deck and hatches. It makes a difference with all the dust gone.

In the evening, mounted the chains to the crane on the foredeck. It now really starts to look like in the old days. I still need to paint the crane, but that’s for the future. One thing that I didn’t know: a chain costs a lot of money. 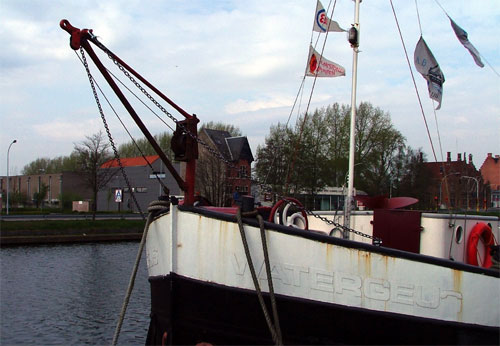 20th April 2010 – Today some major jobs have been done. In 2006, one of the recommendations was to close the engine room from the hold. I had built a bulkhead a bit further o extend my engine room, but this has not been approved, so I still need to rebuild the original bulkhead. When I would do that, there is a space that I could no longer enter. Therefore I wanted a hatch on deck to enter this area. Important was the size since my generator will have to enter this room in the future.

Many vessels used to have a davit (crane) on the foredeck to lower and raise the anchors. A while ago I was able to buy such a crane from a neighbour. Since you need at least two people to lift and mount this heavy item, this was the perfect moment. I expected to lift the crane with two, but we had to dissemble it completely. The foot of the crane, not more then one meter high, was so heavy we could barely lift it on the anchor winch. It nearly broke my back, but after it was mounted, I was satisfied with the result. 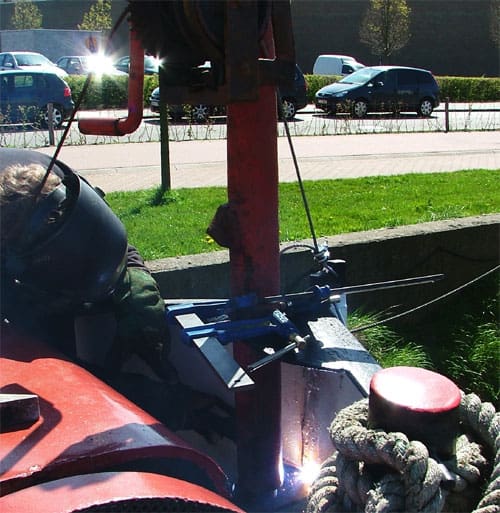 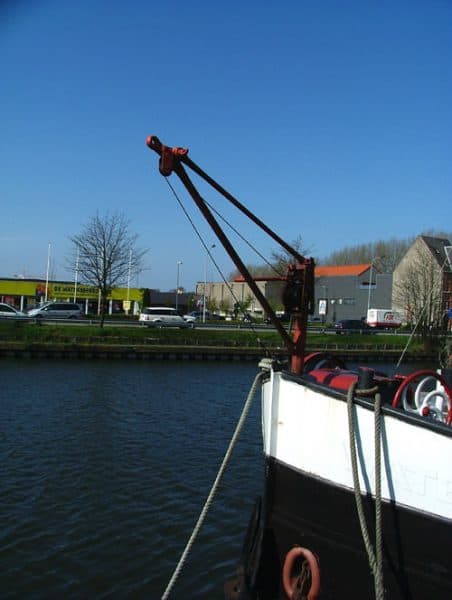 19th April 2010 – Some more paint has been removed today. It is now starting to look good. It gives me hope to continue. 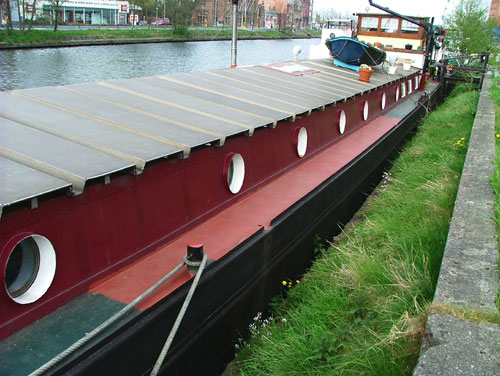 I made some preparations for the tomorrow since a hatch has to be built. 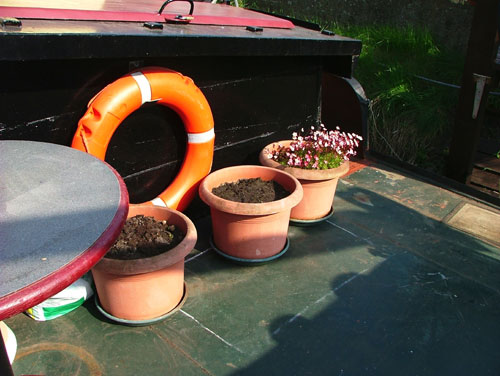 14th April 2010 – One thing I don’t like living on a boat is filling the water tanks. It takes hours to fill up my 6000 litter of water. There is a connection in the street where we can take water, but it has a small hose.

8th April 2010: In the late evening I decided to remove some more paint. The wind was blowing the other side then the last couple of days, so I started working on portside on the deck. 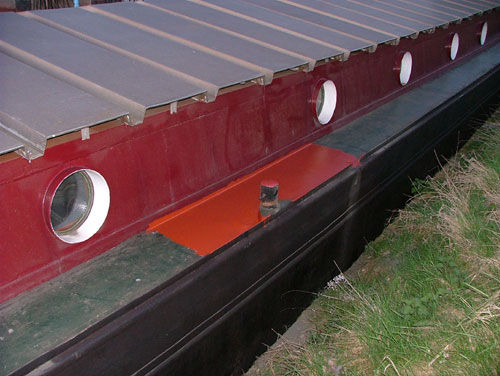 I made a quick calculation. 2 meters a day, 80 meters in total will cost me nearly two months of work to clean the whole deck. I know what to do in April and May.

7th April 2010 – I visited another barge with some potential for the future. It is more of wreck then a barge. At the other hand it is a historical vessel and certainly not in a better condition then the Watergeus once was.

At this moment there are a lot of barges for sale in Belgium. There are a few reasons why:

Therefore I’m still doubting whether I will take such a project or not. Buying the barge may be cheap, converting it will cost me a fortune.

6th April 2010 – The remaining old paint between the wheelhouse and the tabernakels was removed this evening. 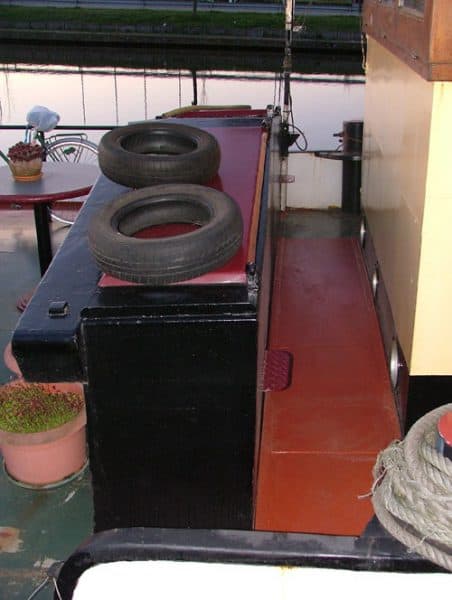 5th April 2010 – My neighbour left for the yard in the early morning. I had a look and went back to sleep shortly after.

Another two meters of deck have been cleaned. Two meters of deck were one and I was surprised to see how bad this part was. A lot of pitting in the metal. It took me more then three hours to have it on bare metal. The result was good and a nice coat of metal primer is protecting it. 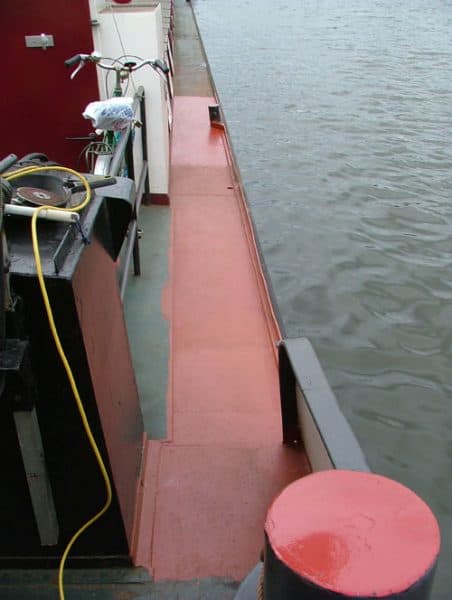 In the late afternoon I started again doing a piece near the wheelhouse. Fortunately the deck was in a much better condition. 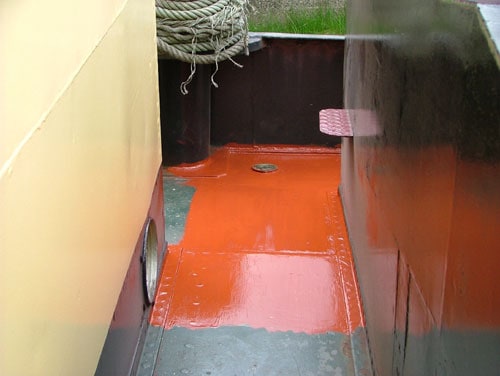